Posts by FIRE UP

charleetho said:
I saw 3 2023s sitting on my local dealer floor yesterday. They are out there.
Click to expand...

But they are NOT THAT COLOR BLUE of the '22's which has been in ultra-high demand and VERY LOW supply ever since they were introduced.
Scott

bayrec1 said:
Is there no difference between 2023 and 2022 besides paint? There are 2022 blues on the cycletrader site.
Click to expand...

bayrec1,
I have seen very little in either physical or any other type differences between the '22's and '23's other than paint. As for them being on or in the cycle trader, well, here's a super short story. Back in April of '22, the CEO gave me the all clear to pursue and purchase a brand-new Wing of my choice, YAHOOOOOOOOOO!

I found out the '22's came in this fantastic BLUE color that was/is quite different than the '18's Hawkseye blue. So, I sat down with the cycle trader and started calling ads for brand new Blue DCT Tours. I didn't want any other version of a '22 Wing, just the Blue DCT Tour. I could care less about the air bag model. Each ad I pursued, indicated they (a dealership) indicated they had, IN THEIR POSSESION, a 2022 BLUE TOUR DCT. And about 98% of them also had VIN numbers associated with those bikes in their ads.

One by one, each dealership I contacted, had already sold that bike and in some cases, weeks earlier. And, every single dealership I called, had absolutely NO IDEA WHEN THE NEXT WINGS would arrive. They all wanted to take my number. I left my number with many of them. All in all, I called 15 states, some with multiple dealerships and, as stated, each one had an ad with a VIN and not one of them had a BLUE DCT TOUR in stock.

So, after almost a half day on the phone with absolutely zero results, and no promiss of a new Blue '22 for even months, I reverted back to an '18. We ended up purchasing an '18 Tour DCT Airbag with 5,300 miles on it about 3 hours from where we live. Since then, it's been an outstanding Wing with zero issues. I'd kind-a be surprised if there's Blue 2022 Tours ACTUALLY AVAILABLE FOR PICKUP right now. That doesn't mean it can't happen, it just means it's pretty darn rare for the times we're in and the demand for that model and color. I could have purchased several bagger models in all black or whatever color was offered. I didn't want those.
Scott

Ridewv said:
bluewingjb if you can change your name to redwingjb the local dealer here has a red 2022 Tour 6-speed on the floor. They've been selling at msrp + the stupid $85 doc fee.
Click to expand...

"....+ the stupid $85 doc fee."
$85 for a doc fee is phenomenally cheap. About 3 weeks to a month ago, I was dealing with a very large corperate dealership that has over 106 dealerships nationwide. I was looking for a new, '23 Honda Monkey. Those, like the Blue '22 Tour DCT's, are insanely rare to be ON THE FLOOR, ready for sale. Anyway, they had a brand new '23 come in with no buyers. The dealership in question was in Las Vegas and we're in Lake Havasu, about 2.5-3 hours away, plus or minus. I called and it was available. I started working a deal over the phone and because I know how sought after these darn little Monkeys are, I credit carded a $500 deposit almost immediately.

Hey Brian,
My buddy that lives just up the street has both a '22 and a '23 Monkey. He's a snowbird from Idaho to here in Havasu in AZ. He's got the '22 here in Havasu and the '23 in Idaho. He's 6' 3" tall and around 240-ish. He really doesn't look all that out of place while seated on the Monkey. If one has never been on one, they're actually bigger than they look in pictures. I jumped on his '22 the other day and took it for a quick spin. I'm 6' 2 1/2" and 245-ish and it's amazing how well that little 125cc injected engine powers my lard butt around. And, where we live, there's ZERO flat roads. It's either UPHILL or downhill from my house. I went up hill and it accelerated dang good for that little engine.

The figures I quoted when dealing with that particular dealership are nationwide. They charge the same exact "fees" for the same part of the write up in one state, as they do in other states of the same corporate dealerships. It seems the smaller non corporate dealerships can charge considerably less in add-on fees maybe because they're not supporting their brothers and sisters in every other state. I think I'm gonna be selling my '18 Honda Africa Twin Adventure Sports DCT and will use the funds from that to procure the little Monkey.
Scott

Ridewv said:
There was a new one parked in front of the dealership 3 years ago but when I asked about it was told it was actually used with 170 miles. He said I could have it for $2,700 so I said ok load it in my truck then paid them $2,785 and took it home thinking it could be nice to take along when my friend and I go truck camping. Here it is with her posing on it, no she didn't ride like that! 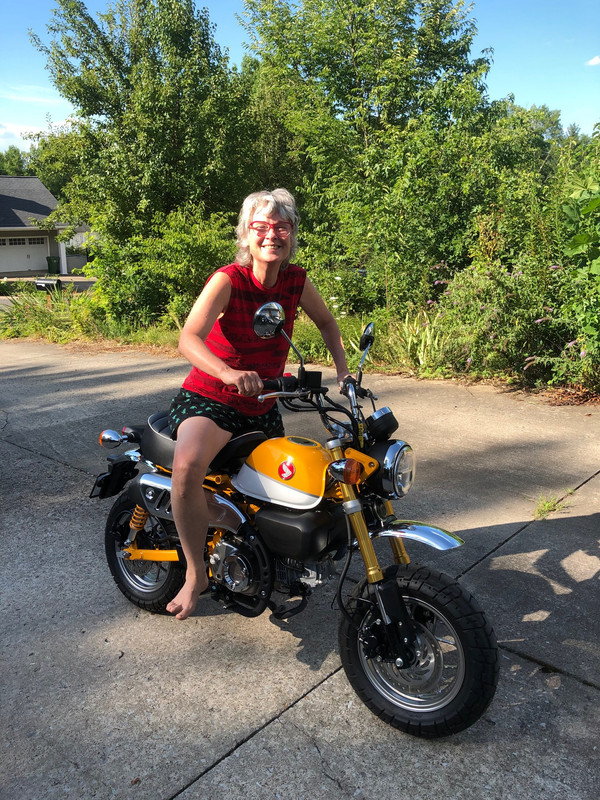 But long story short I quickly determined that my XT250 did everything the Monkey could do only better (other than look cute) so after riding it only 150 miles myself I traded it back to them a few months later. It didn't ride that well on bad roads and on smooth roads I didn't like the idea going wide open, 30-40 mph, up hills with cars and trucks right on my tail.
Click to expand...

RideWV,
They are a neat little bike. But, BUT, they are a LITTLE BIKE as you found out. They do have limitations without a doubt. The '19's, '20's and '21's are four speed versions and have weaker suspension and no oil filter. The '22's and up gained a 5-speed tranny, stronger progressive suspension springs and an oil filter. The top speed on your model, which by you stating "3 years ago" I'm assuming it was '19", correct, is kind-a what you found to be around 35-40 mph. I don't have any idea what that additional gear in the '22's and up will give the Monkey for top speed.

The first thing that guys need to realize when purchasing something like a Monkey is, IT'S NOT A HIGHER SPEED motorcycle. It is for city streets, lower speed county and country roads where a person just wants to cruise along and enjoy the scenery and life.

I also have a 2007 Yamaha TW200. It's BONE STOCK and zero modifications. To me, the top speed without ringing the little 200cc motors neck is close to 45 mph. Yes, it will do 50 but, I'm not one to simply do WIDE OPEN THROTTLE just because I can and the bike will run like that. I know many that will push that bike to 65 mph. That little engine is whining its guts out. Nope, not for me. If I want higher speeds, I'll jump on the Africa Twin or the Goldwing. If I want put-put around town or little dirt roads where I can do 25-30 for years on end, out comes the TW.
Scott

It's the bike I dreamed about when I was 12 but could never get with 4-boys in the family.
Click to expand...

Roger that Brian,
WOT on it could get the 55 mph but comfortably, I think as stated, around 35 - 40 would be more suitable for sustained engine life don't ya think? I'm real comfortable at those same speeds on the TW. Yeah, I've pushed it to 55 on very rare occasions but I feel for these little engines. Hopefully, I'll have a little Monkey sometime in the near future. I (we) don't mind traveling to purchase our vehicles or motorcycles. We've done it so many times that it seems like there's something wrong if I find something I'm looking for in my own hometown.
Scott

· Premium Member
2018 Honda Goldwing Tour DCT Airbag
Joined Oct 9, 2008
·
3,356 Posts
" But those plaid seats!"
Hahahahahahahahahahahahahah! What a crack up. Yep, you, me, my buddy and anyone else I've spoken to about the '23 Monkey "Plad" seats is still somewhat dumbfounded. I mean come on Honda, what, you got drunk one night and someone in a bar suggested Plad seats on your newly designed Monkeys? Geeese! I've done a tad bit of upholstery work in my life and if and when I get one, no matter the Red or Yellow one, that seat cover is gonna come off and I'm gonna rip it apart and sew in some decent alternative.
Scott

Yessiree,
Those "Up-charges" that that corporation/dealership charge on each sale, nation wide, are apparently just fine with the general public as they keep buying motorcycles, side x sides and more from them and they still remain in business. Well, they ain't gonna get any of my business for sure.
Scott

Ridewv said:
You can do a fly and ride and post your ride from WV back to AZ on your Monkey!
Click to expand...

I would to that on a Wing in a heartbeat. But on a Monkey???? Highly doubtful. Can you see me on I-40, I-80, or any other cross country freeway or even a lesser set of roads that may connect one end of the country to the other, with all the crazy-a$$ truckers and cagers wanting to do light-year speeds, naw, ain't gonna happen.

Ever see those two yahoos that did the Baja 1000 on two Monkeys? They were a crack up to watch. And I think the same two bone heads did an Alaska run too on a couple of trail 90's or something like them.